Back in the summer of 1995 I was traveling with my family through the Navajo Reservation along Highway 160 in Arizona. We were making our way from the Grand Canyon towards the Four Corners before heading on to the Cliff Dwellings at Mesa Verde as part of an almost two week trip to the southwest.

Somewhere before Cow Springs a railroad track had begun to run along-side the road. Many times on our travels a track would run parallel to our route and I would hope for a train. This time I was even more eager because  there were overhanging electrical cantilevers signifying this was an electrified train route. Aside from the light rail in Denver the week before, I had never seen an overhead electrified train.

The journey to our nation's southwest was already heavily steeped in railroadiana. We had reached the halfway point at Flagstaff. In Denver we had seen the Cubs loose to the Rockies at Coors Field (were we had ridden the then 1-year-old electrified light rail to and from the stadium). In Colorado Springs my dad and I rode up the side of Pikes Peak on the cog railway. In Canon City we rode the mini train, as well as took the tram down to the bottom of Royal Gorge. We had even stopped in Chama, New Mexico, to see, but not ride, the Cumbress and Toltec. Our main ride was still ahead, waiting in Durango where we were going to board the Durango and Silverton Narrow Gauge Railroad for a journey up the Animas River valley to Silverton. 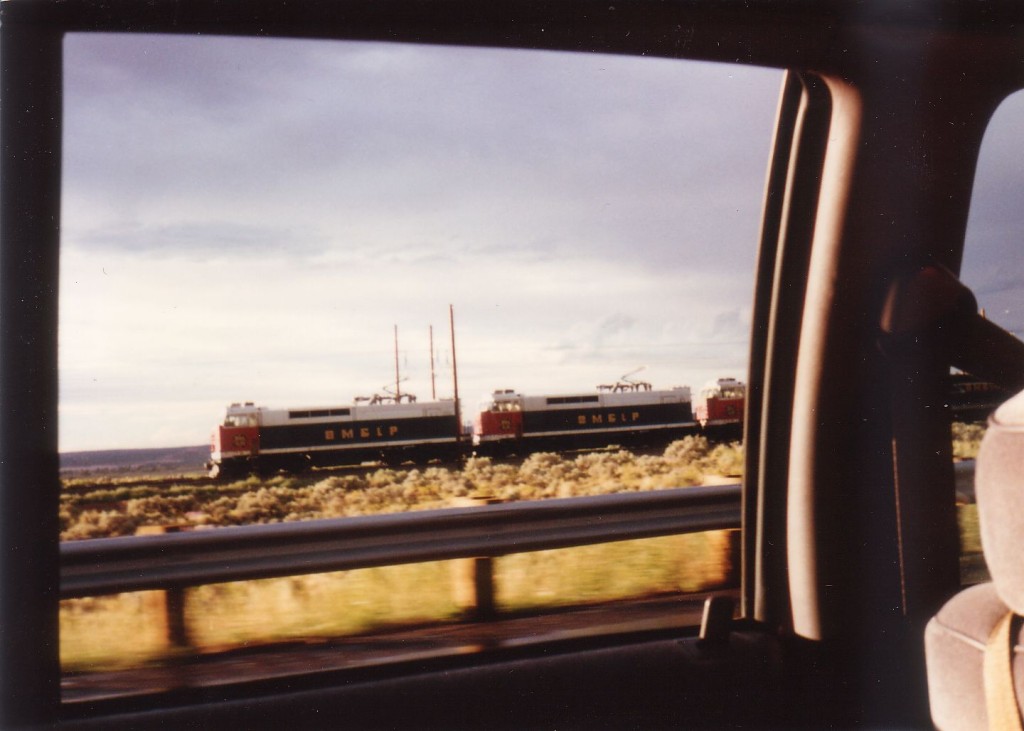 As we drove along side the track, I waited in anticipation. Much like the Nebraska Platte River Valley where I grew up, the land was flat and stretched for miles in all directions. Though instead of the luscious green crops with the occasional farm, the landscape here was a desert yellow and brown with small brush giving the land a harsh, yet fluffy rolling look. Few, if any, dwellings were to be seen. It did, however, afford a wonderful view of the horizon with purplish hills and mountains in the background. Also, the track ahead was in clear view.

Finally, my parents spotted a train coming about a mile away. I grabbed my camera (an old 35mm Kodak point-and-shoot) ready to snap a shot. I watched it approach and then I caught the shot. Framed by the drivers side rear window, I recorded 3 electric engines traveling west pulling a full load of coal.

The name and purpose of the railroad had eluded me for 15 years until recently when, after taking a second look at the lettering, realized the "S" of what I thought was "SM&LP" was actually the letter "B" for the Black Mesa and Lake Powell Railroad. This simple realization unlocked a world of resources online including YouTube videos and sites with a page or two devoted to the railroad.

The operation of the railroad is simple: Deliver coal from mines near Kayenta 78 miles to the Navajo Generating Station in Page, Arizona. Trains reportedly operate 24/7 making 3 round trips a day in order to provide enough coal to the power plant to produce 2,250 megawatts that powers portions of Arizona, Nevada, and California. Why is it electrified? Hauling diesel fuel out to the plant and coal mine the fuel the train in the middle of the desert would be too costly.

The engines I captured back in 1995 are GE E60Cs and most of that fleet (if not all) have been phased out and replaced by  E60C-2s purchased from Ferrocarriles Nacionales de México (the government-run national railroad of Mexico).

The coal mines are a series of mines connected by miles of conveyors that bring the coal to the BM&LP filling area. You can see how extensive the connection is by looking at satellite photos of the Black Mesa area from Google Maps.