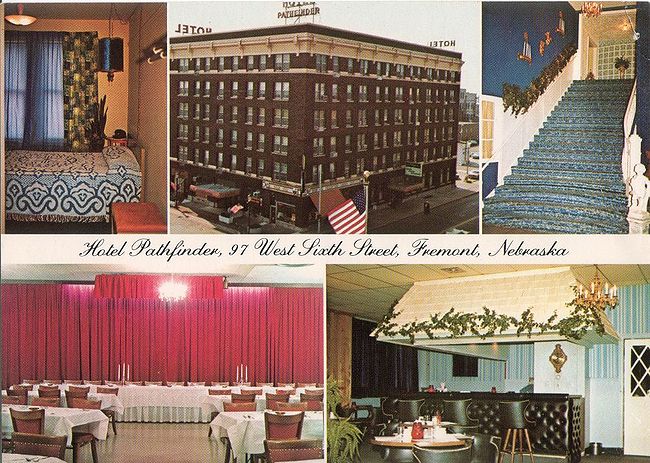 Any historian focusing on the history of Fremont, Nebraska, will find themselves devoting days, if not weeks, into researching the Hotel Pathfinder and the tragic events of January 10, 1976.

Though my birth-date would occur over a year later, as a children my generation would hear stories of the devastation from teachers, relatives, and local story tellers. Growing up many of us heard survivor stories second if not first-hand. All of us heard "I remember where I was when..." stories from our parents, grandparents, aunts, and uncles.

Once, while sitting at my grandmother's table, she pulled out pictures (in color even) of smoke billowing out of the hotel, hoses on the ground, and firemen trying to put out the flames and rescue survivors. I don't remember if she or my grandfather took the pictures.

A parish priest I once spent a summer working for told me of the grief a colleague had gone through standing amidst the devastation looking up at people still trapped inside. He had felt helpless seeing them in agony, calling for help from their windows, and there there was nothing he could do but pray. Inevitably some did not survive.

Aside from the stories and anecdotes I've gathered from newspapers, friends, and family, I was fortunate to find a postcard from the hotel (pictured in this post) many years ago in an antique store. I had long collected postcards from the Fremont area and always found this one particularly fascinating, and a little eerie, as it gives a rare glimpse inside the building.

The Hotel Pathfinder stood at the corner of 6th and Broad for 59 years and served an important role hosting guests and community functions.

In 1915 the growing community required a larger hotel so in 1917 the six story Hotel Pathfinder was built with 115 rooms and a capacity of 360.[1] A postcard from Hotel Pathfinder in the 1970s boasts: "Located in downtown Fremont. Coffee Shop, Dining Room, Cocktail Lounge, Top of the Stairway Ball Room, Colorful, re-decorated rooms. Live Entertainment. Apartments Available." Other businesses occupying the hotel included Brown Bag Drug Store and a barbershop. Various meeting rooms also were available for functions such as organization meetings.

The morning of January 10, 1976, a hotel maintenance worker smelled gas and management attempted to contact the gas company. The gas company could not be reached so the police department was contacted. The police department referred the hotel back to the gas company. When gas employees were finally reached, they arrived on site to confirm the detection of gas. There was only time to evacuate the kitchen before the hotel exploded and erupted into flames at around 9:30 a.m.[2]

The explosion forced its way up the elevator shafts immediately spreading to all six floors. The blast could be felt as far away as the Fremont Mall, located 20 blocks to the northeast[3], and even by a pilot flying a plane in the vicinity. Windows in the downtown area were blown out by the blast or shattered from the tremors. Large chunks of concrete were forced up due to the fact that the basement extended underneath the sidewalks. Debris came down on nearby buildings, cars and, in come cases, by-standers.

Many who survived the blast were still trapped in their rooms requiring the use of limited ladders and bucket trucks. Some could not be saved. According to the Fremont Tribune, "Eighteen people died in the blast and two more died of injuries later."[4]