C.A. Coey's School of Motoring was a mail correspondence course in the 1910s that for $15 aspiring chauffeurs, mechanics, and auto salesmen could learn the rules of the road and how to maintain automobiles. The Coey-Mitchell Automobile Company also sold three models during its four year life.

In the 100-year-old text relating to motoring, I found some lessons that are still applicable to our daily lives outside the car.

I also crack open the latest Pepsi throwback, "Pepsi 1893," and give it a swirl. Do I like and recommend it? 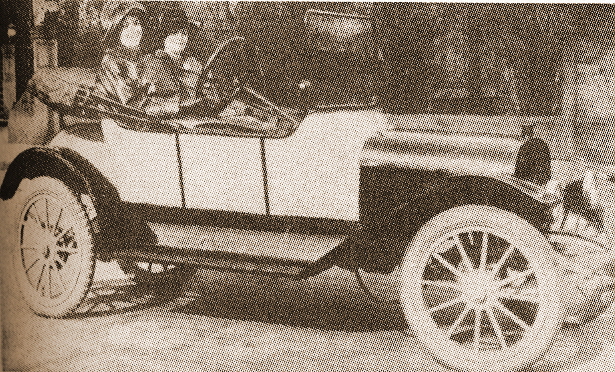 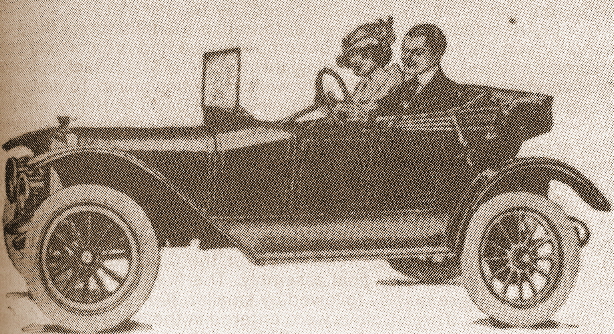 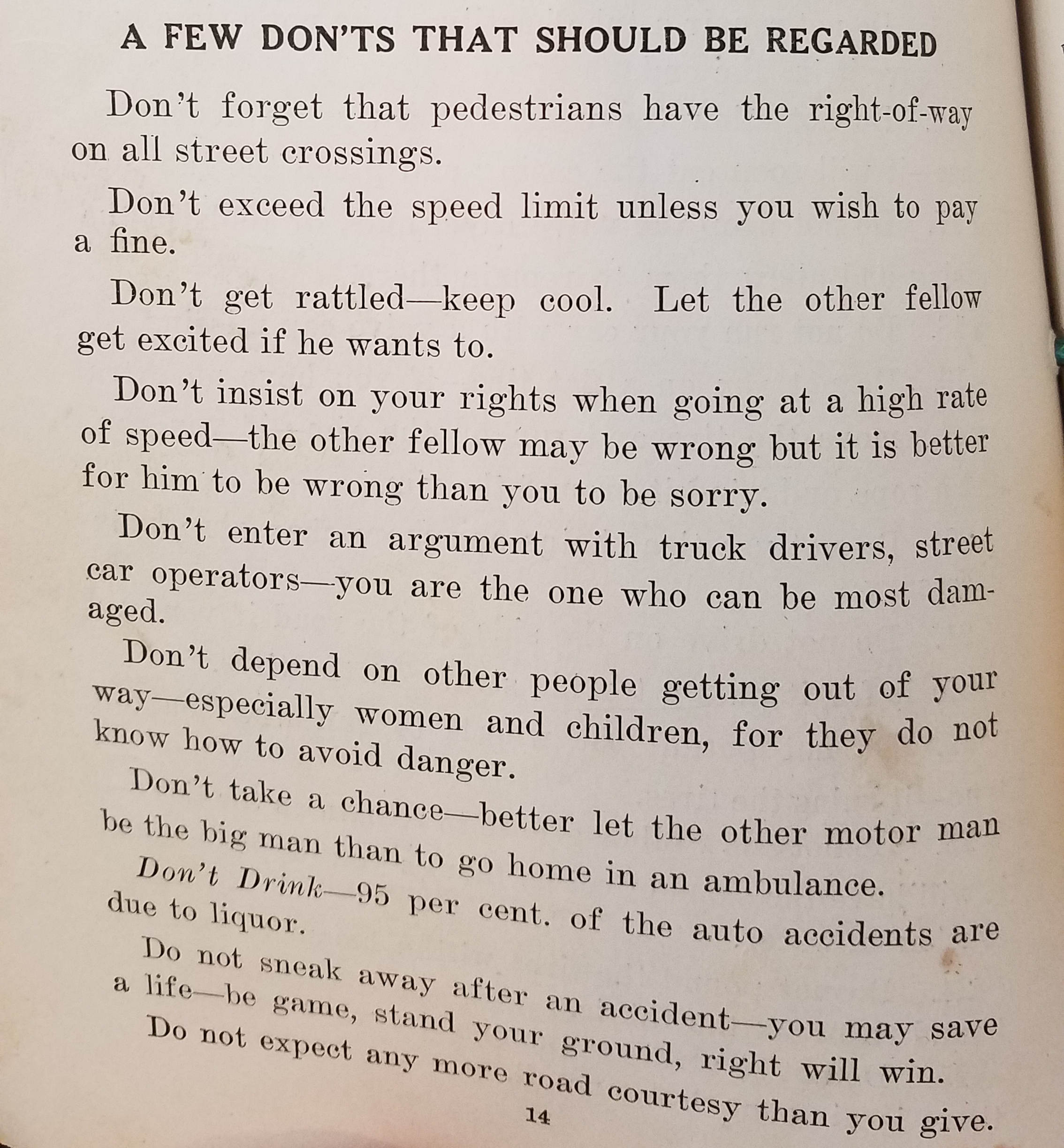 Don't expect more courtesy than you give
An image of a page describing what not to do, such as sneek away from an accident 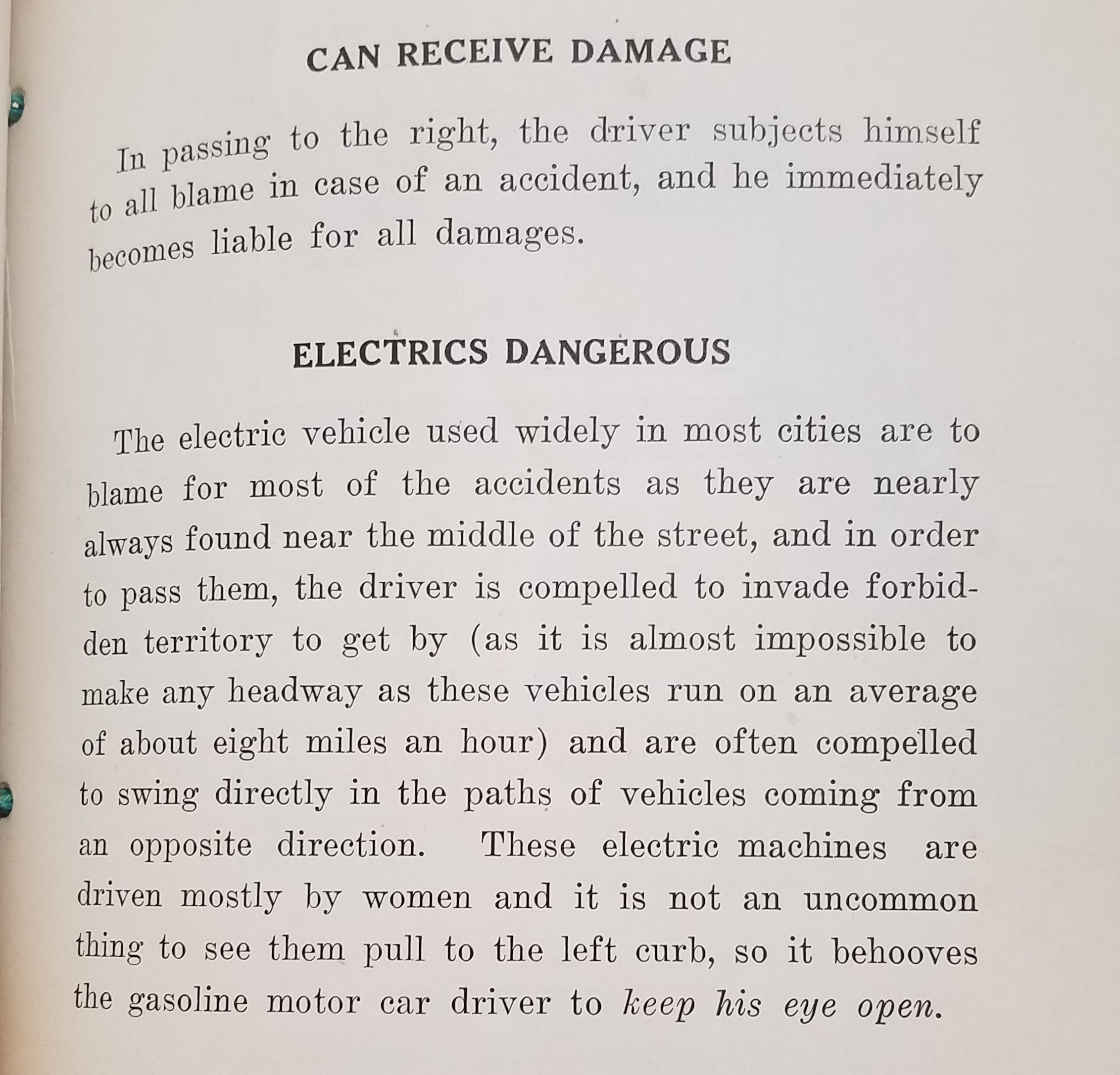 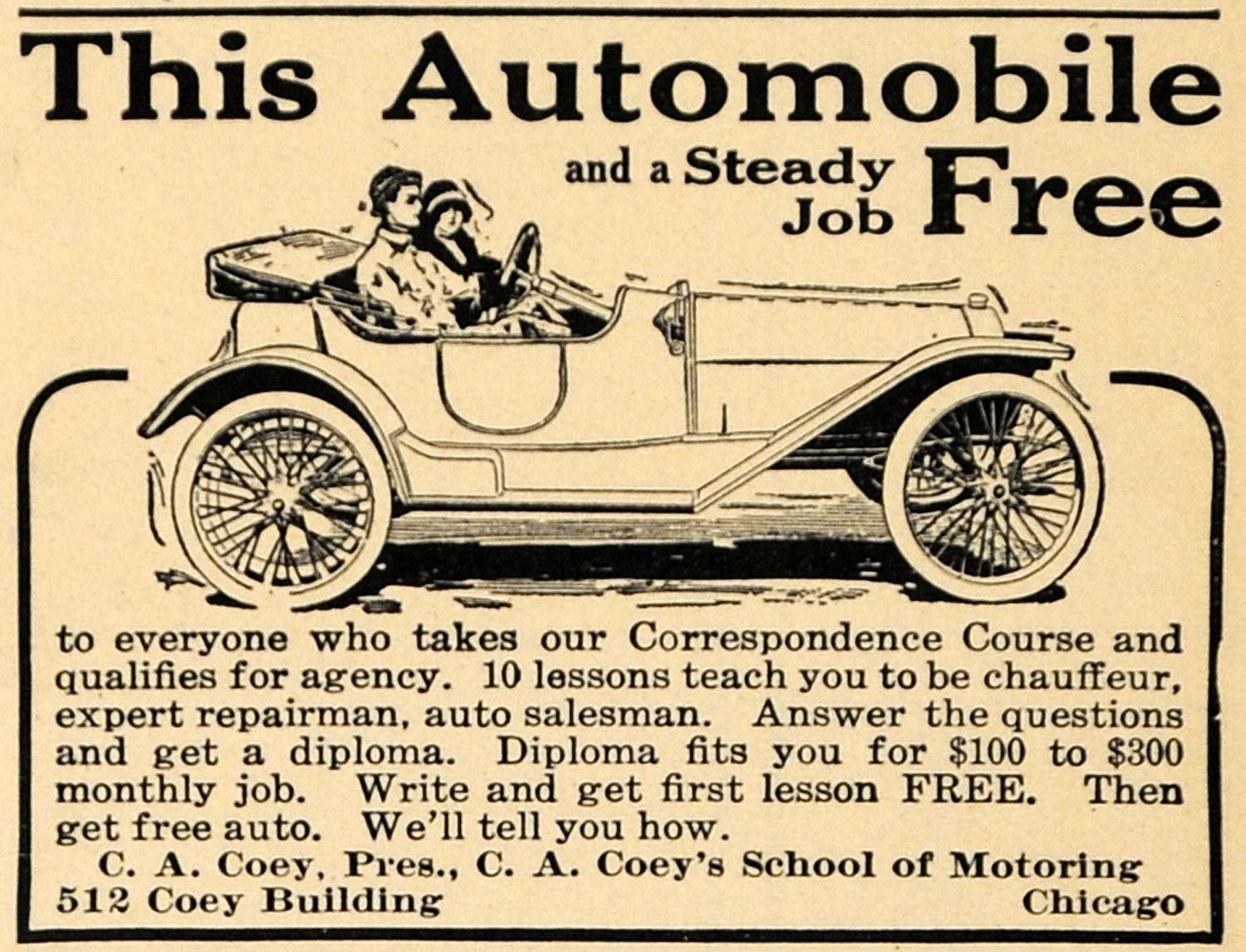 C.A. Coey's School of Motoring ad promising a steady job and a free automobile (Public Domain, Wikipedia)
An ad showing a motor car and offering an automobile and steady job for free if completing the correspondence course and qualifying for sales or repair jobs 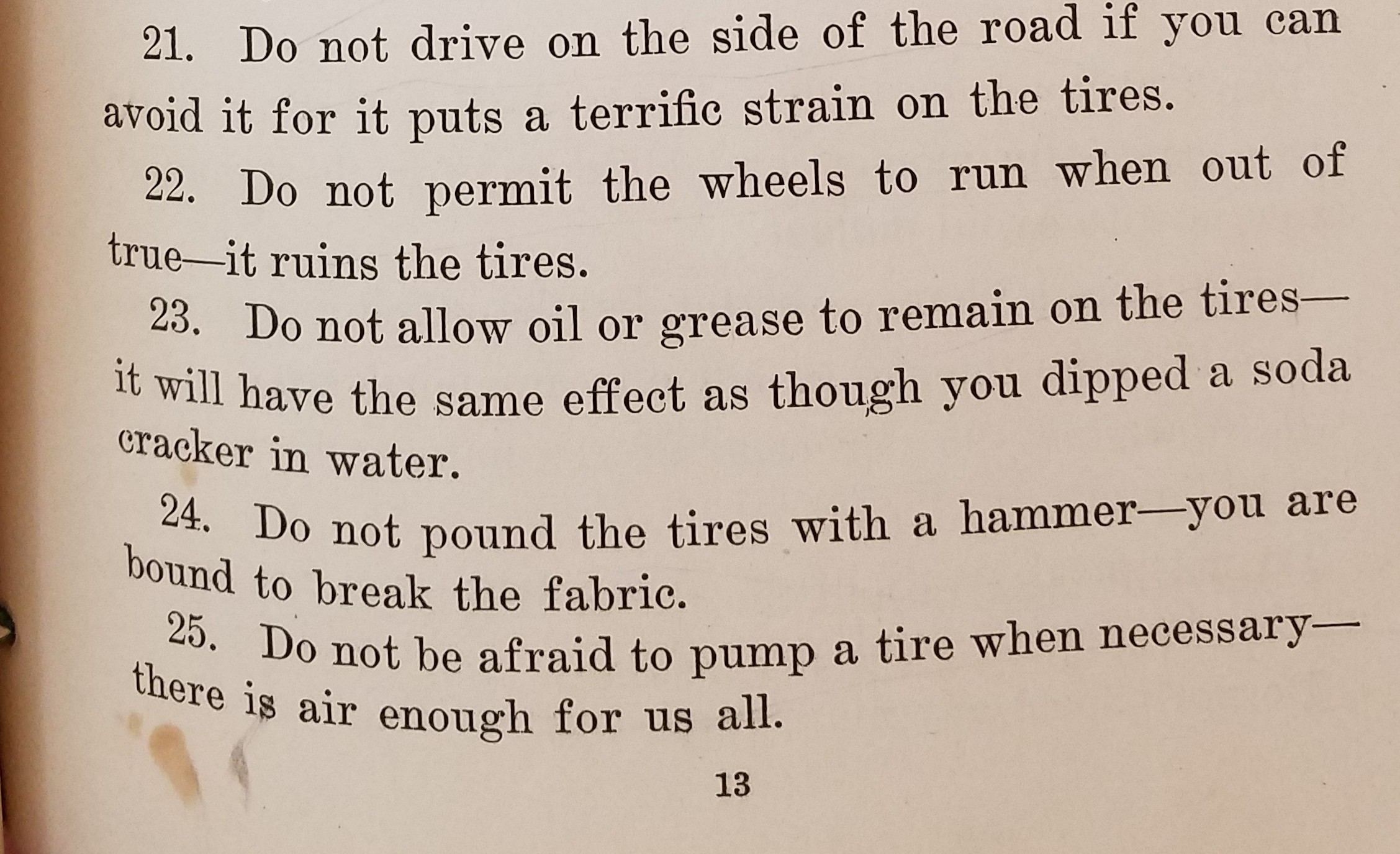 I'm Chad, welcome to Railroad Crossing. Today we are going to talk about school of motoring as well as take a sip of 1893 Cola.

Now, you're not going to take a sip, but I am, unless you go down to the store right now, pick up one of these and have one along with me, ah and see if we have the same reaction.

So I was recently going through some of my grandparents' books and one of the things that I came along... or came across, was a C.A. Coey's School of Motoring.

Coey's marketed this as a fifteen dollar course that you could take and learn to be a chauffeur, earn money, basically by taking people around.

The correspondence course would teach you how to maintain the vehicle, how, ah, the rules of the road.

This was ten lessons that you could take. You would basically get Lesson One and then in the back of Lesson One there were questions, you would fill out those questions, send them in, they'd grade them, then they'd send you Lesson Two.

Um, a few of the passages that I liked when I was going through this was about electric cars and they were driven mostly by women, and they could be unpredictable, according to this.

It says--I mean, I--[stammers] not my quote, it's coming from here:

"The electric vehicle used widely in most cities are to blame for most of the accidents as they are nearly always found near the middle of the street, and in order to pass them, the driver is compelled to invade forbidden territory to get by (as it is almost impossible to make any headway as these vehicles run on an average of about eight miles an hour) and are often compelled to swing directly in the paths of vehicles coming from an opposite direction.

These electric machines are driven mostly by women and it is not an uncommon thing to see them pull to the left curb, so it behooves the gasoline motor car driver to keep his eye open."

So here are the Life Lessons I found from Coey's.

Do not be afraid to pump a tire when necessary--there is air enough for us all.

Don't forget that pedestrians have the right-of-way on all street crossings.

Don't exceed the speed limit unless you wish to pay a fine.

Don't get rattled--keep cool. Let the other get excited if he wants to.

Don't insist on your rights when going at a high rate of speed--the other fellow may be wrong but it is better for him to be wrong than you to be sorry.

Don't enter an argument with truck drivers, street car operators--you are the one who can be most damaged.

Don't depend on other people getting out of your way--especially women and children, for they do not know how to avoid danger.

Don't take a chance--better let the other motor man be the big man than to go home in an ambulance.

Don't Drink--95 percent of the auto accidents are due to liquor.

Do not sneak away after an accident--be game, stand your ground, right will win.

CHAD: That's just assuming the other person is of course at fault because YOU took the motoring school class so you would never be at fault, right?

And then my favorite:

Do not expect any more road courtesy than you give.

If you haven't yet, go ahead and go get one of these.

Not a sponsor. Not an ad or anything like that.

[Can top opens with a hiss]

Um, unfortunately, I'm pretty sure this didn't originally come in cans, I kind of know the history of cans, I wrote a little bit about it.

Probably came in a bottle more like this. This was actually bottled in 1998. I'd recommend not drinking this.

But, ah we're going to try this original cola.

Oh, I should explain a little about this, I haven't done that.

Crazy, I'm getting ahead of myself here.

Hopefully not anything made back then, just bottled recently. Purportedly using the original fola. A cola. Fola.

And the real sugar, this here, it say Fair Trade Certified Sugar, so it's not just any sugar, it's fair trade. So you can feel good about that.

What IS natural flavor?

What are you thinking?

Okay, so for those of you who are not testing along, I'm trying to think here.

Heh, I actually have to say, it tastes more like Crystal clear Pepsi. Or maybe a little bit like Coke.

But I always thought, back in the 90s when Crystal clear Pepsi actually did come out, for the first time, I did, when I had it I kind of felt like it tasted like Coke.

[Chad voice over] It definitely has more of the cola flavor.

I'm sorry if you were waiting for you know, Good, Bad, should I try it, what not.

I think it actually tastes better than regular Pepsi. I mean, I'm not a pop aficionado, or whatever, I mean, obviously I some affinity for Pepsi and um I--I feel sorry for the poor sap who drank this. Ah--yeah.

Obviously if there is something like this I'll try it. If you are one of those people who kind of wonder, and you see a new brand and you want to try it, yeah, definately go ahead and even if you're not, I'd say pick up a can--not a sponsor--pick up a can and try it out.

So, what did we learn today?

Well, we learned, that you basically receive as much courtesy as you give.

I'm going to get a lot of angry comments about that.

So don't expect any more than what you give.

We also learned to try new things, or old things, if you will.

That's about, that's about it. So um, again, I'm Chad, thanks for watching, this is Railroad Crossing, and I will have a new video--

Oh! A train around the room update.

Not much has happened. In fact, nothing's happened. Um, at all. So, maybe coming in the winter time I'll do something, but we'll see.

So, thanks for watching.

For they do not know how to avoid danger.

I'm going to get a lot of angry comments about that.

Below are the sources of information I used to create dialog and factoids (and make myself appear generally knowledgeable) in the video.